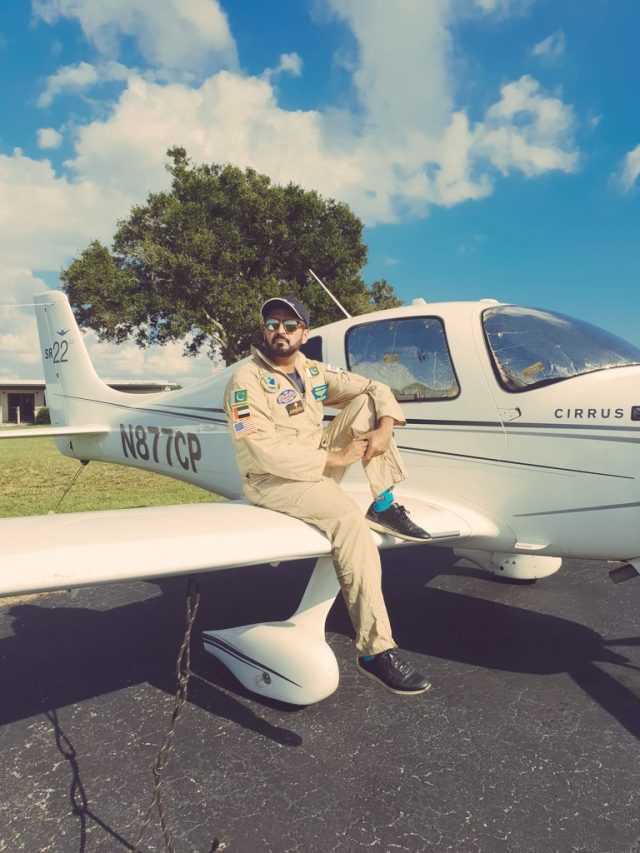 FLORIDA (USA): Fakhr-e-Alam is a name in Pakistan who has made the nation proud at every level. From introducing ‘ Rap’ in Pakistan to acting, hosting and raising awareness as a social activist, Fakhr e Alam has been a real ‘Fakhr of Pakistan.’ He is once again determined to make Pakistan proud by becoming the 1st Pakistani in the history of the world to circumnavigate the globe.

Fakhr turned his childhood dream of flying into reality when in the year 2015, he received his private pilot license in Florida, USA, same year he announced an attempt to circumnavigate the globe in a single-engine aircraft. Three years later of the announcement, Fakhr is finally ready to take off on Wednesday, October 10th, 2018 from home base KCLW, Clearwater Airpark, Tampa Florida, USA.

As per the previous schedule, he was unable to depart on October 6th due to some technical malfunction  during a test run, however, the airplane has been cleared to take off after extensive testing and has been brought back to home base KCLW for the final preparations.

On an estimated 28-day-long journey, Fakhr will fly covering 31 cities and 25 countries. He expressed his gratitude to the US and Russian Consulates in Karachi for issuing him timely visas at their earliest. He also said, “I would like to thank my friend Kurt Roy, who has been a great support throughout and the people at Tampa Bay Aviation who have done an extra ordinary job to keep things in order.”

Fakhr is not just fulfilling his childhood dream but plans on breaking a few records on this journey, “If everything goes well, I will become the first Pakistani in the history of the world to circumnavigate the globe” he added.

Currently, Fakhr is busy with the preparation required for his epic take off. We wish him all the best for Mission Parwaaz.