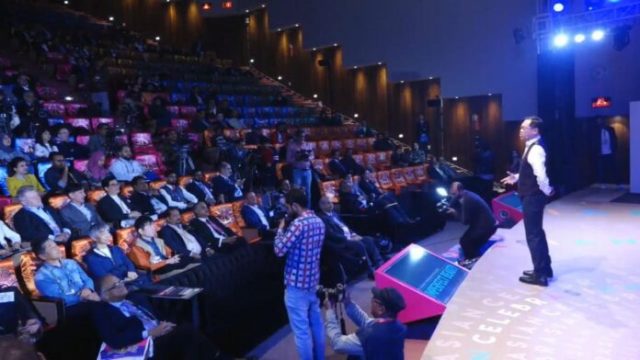 LAHORE: The second day of AdAsia Lahore took place at the Alhamra Arts Council, where marketeers and ad gurus from different parts of the country congregated after a break of three long decades, a local newspaper said.

The conference, which began on Tuesday with a conversation between marketing guru Sir Martin Stuart Sorrell and veteran journalist Richard Quest, will conclude on its third and final day on Thursday (tomorrow).

According to the newspapers, the event focused on the future of the advertising world, as mediums of marketing and advertising are rapidly changing in the ever-advancing, ever-evolving technological world.

AdAsia is Asia’s largest and most prestigious ad congress held every two years under the auspices of the Asian Federation of Advertising Associations (AFAA). Its theme is ‘Celebrasian: Celebration of Advertising and Creativity in Asia’. Prime Minister Imran Khan had been billed by the event to deliver the opening address until the night before, but he did not end up upcoming.

However, the attendance remained thin for the on the second day, with the halls at Alhamra almost half full. While the thin crowds could usually be explained away by the fact that AdAsia Lahore is not meant to be a festival and is targeted towards marketers, marketing students, professionals and buffs that were expected to turn did not really manage to come through.

One of the main highlights from the day was by Wille Eerola, the Counsel General of Finland to Pakistan, and the Chairman of the Finland-Pakistan Business Council. “My love affair with Pakistan started with the ad agency business. That’s why it’s so wonderful to see AdAsia back in the city,” he said, commenting on the long drawn out hiatus that AdAsia has had from the country.

The general perception among delegates and other attendees was that the event was a milestone in helping improve Pakistan’s image. Many of the attending foreign delegates had come expecting much more dire straits in Pakistan in all possible ways, and were surprised to see the condition of Lahore and the organisation of the event.

There were, however, some raised eyebrows over an award presented to Khawar Masood Butt, the Chairman of English Biscuit Manufacturers (EBM). Butt was given the prestigious ‘Leadership Award’ by the Asian Federation of Advertising Associations (AFAA). This accolade was presented in recognition of his tremendous contributions to the marketing and advertising industry of Pakistan as well as his vision and good governance resulting in EBM’s successful growth over the years.

The CEO & MD of EBM – Dr Zeelaf Munir received this award on behalf of Khawar Butt.

While Butt has had a rich history in the advertising world, his company, EBM, is also the main sponsor of AdAsia Lahore, having spent approximately Rs30 million on the low attendance event according to one source. Traditionally, lead sponsors are expected to recuse themselves from the selection process for awards at such events, which caused whispers in certain advertising circles.