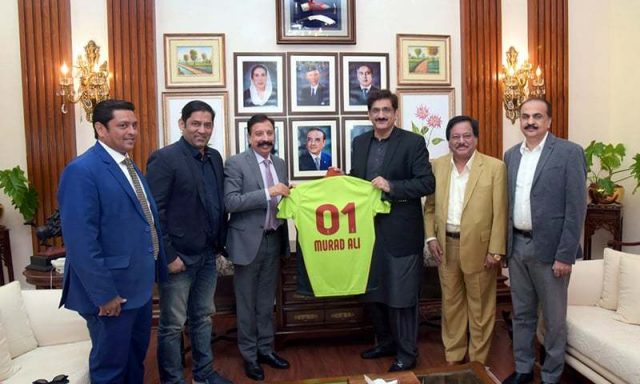 We are very excited to host the matches in Karachi and people of this province are anxiously awaiting the events, says Murad Ali Shah

Sindh Chief Minister Syed Murad Ali Shah said that he would be glad if Lahore Qalandars and Karachi Kings play the final match of the Pakistan Super League (PSL) in Karachi.

He expressed this wish while talking to media just after meeting with a PSL delegation led by Fawad Rana.

He lauded Shah’s role in bringing PSL to Pakistan, particularly to Karachi. “You took ownership of PSL last year and made it a regular feature of the city,” said Rana in appreciation.

The chief minister told the Qalandars’ owner to start hunting talent from Sindh, particularly from Sehwan, the land of Lal Shahbaz Qalandar in whose name he has founded his team.

Shah said that last year only one PSL match was played in Karachi and this year five matches would be played in the city. “We are very excited to host the matches here and people of this province are anxiously awaiting the events,” he said.

The chief minister provided the delegation assurances that foolproof security arrangements would be made during all PSL matches in Karachi.

Sidhu was a cricketer, I was a soldier, says Amarinder on Sidhu’s Pulwama remark