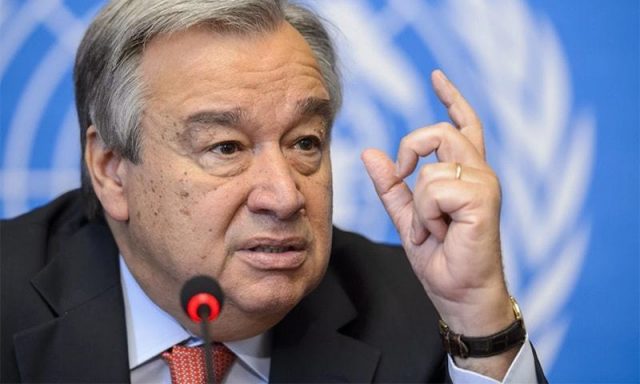 United Nations chief Antonio Guterres on Thursday called for India “to refrain from taking steps that could affect the status of Jammu and Kashmir”.

“The secretary general has been following the situation in Jammu and Kashmir with concern and makes an appeal for maximum restraint,” his spokesperson said.

“The secretary general also recalls the 1972 Agreement on bilateral relations between India and Pakistan, also known as the Simla Agreement, which states that the final status of Jammu and Kashmir is to be settled by peaceful means, in accordance with the Charter of the UN.”

According to the spokesperson, the secretary general was also concerned over reports of restrictions in India-occupied Kashmir, which could “exacerbate the human rights situation in the region”.

India’s Hindu nationalist government stripped the disputed region of its autonomy earlier this week in a move that sent shock waves through South Asia and has seen the restive area come under military lockdown.

Internet and telephone connections in Kashmir have been cut since Monday and a curfew imposed as the authorities feared trouble when the decision was announced.

Modi said Islamabad used the special status “as a weapon against the country to inflame the passions of some people” against the Indian state.

Tens of thousands of people have died in a three-decade-old insurgency in Kashmir. India and Pakistan have fought two wars over the Himalayan region.

On Monday, India’s ruling Bharatiya Janata Party stripped Kashmiris of the special autonomy they had for seven decades through a rushed presidential order. An indefinite curfew — that today entered its fourth day — was imposed in occupied Kashmir and elected leaders were put under house arrest.

By repealing Article 370 of the constitution, people from the rest of India will now have the right to acquire property in occupied Kashmir and settle there permanently. Kashmiris as well as critics of India’s Hindu nationalist-led government see the move as an attempt to dilute the demographics of Muslim-majority Kashmir with Hindu settlers.

Furthermore, Indian Home Minister Amit Shah, who is also president of the BJP, moved a bill to bifurcate the state into two union territories — one, Jammu and Kashmir, which will have a legislature, and the other, Ladakh — to be directly ruled by New Delhi. The bill was passed.

Pakistan had strongly condemned the move and vowed to “exercise all possible options to counter the illegal steps” taken by India. A joint parliamentary session was summoned by President Arif Alvi and Prime Minister Imran constituted a high-power committee to devise future strategy with regards to occupied Kashmir.