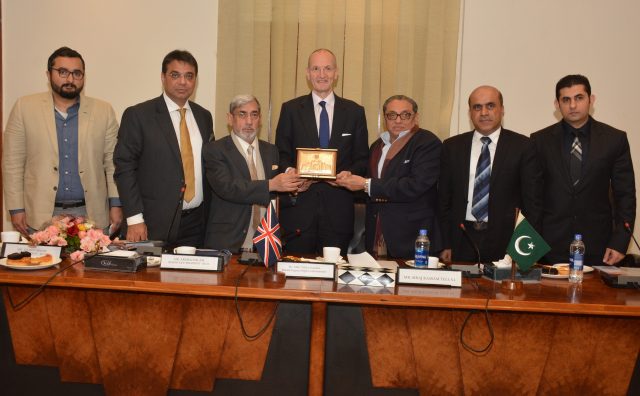 “There is recognition that we should be doing more and there is a greater opportunity here. With more DIT resources, we will have greater capacity to not only support British businesses who are keen to explore Pakistani market but also assist the Pakistani companies looking forward to get engaged with UK companies”, he added while speaking at a meeting during his visit to the Karachi Chamber of Commerce & Industry (KCCI) here on Friday.

British Envoy said that 5,000 British companies are operating in UAE, very few of which are doing business in Pakistan. If they are already in the region and so close to Pakistan then they should be exploring Pakistan’s market more seriously.

He further said that although Islamabad is an important city but Karachi is also very important from a business perspective as it is the commercial and financial services hub where so many key companies and entities are headquartered including the Karachi Chamber of Commerce, Pakistan Stock Exchange, State Bank, Pakistan Business Council, OICCI and many others. “We do have some resources in Islamabad and Lahore as well but majority of the team is based here at British Deputy High Commission in Karachi because of its significance”, he added.

Terming UK-Pakistan relationship as unique, he said, “Both countries have been enjoying very warm and conducive partnership and we are ambitious to take this partnership to the new level as we believe that UK’s departure from European Union which is going to happen on 31st of January 2020 gives us the opportunity to do that. With 1.5 million British People of Pakistani origin which is 2.5 percent of UK’s population, the Pakistani diaspora is involved in businesses, entrepreneurism, civil society, politics, journalism, sports, culture and media.

Referring to UK Pakistan bilateral trade and investment, British Envoy said, “It’s a positive and good story but it could be much better in both the directions. The export business from Pakistan is obviously of more interest to Pakistani and British governments but we would be keen to see what we can do to support the expansion of two-way trade and investment. Pakistan’s exports to UK have grown, particularly in the textile sector because there are specific incentives and rules & regulations but I think UK could be exporting much more to Pakistan and there are other sectors of Pakistan’s economy that could see the UK as a market for their exports. We are in a good position but we should be doing much better.”

Chairman Businessmen Group & Former President KCCI Siraj Kassam Teli, while briefing the British Deputy High Commissioner, we have been successfully resolving issues being faced by the business and industrial community.

Siraj Teli said, “Businessmen Group has been running KCCI’s affairs since last 22 years and every year we have been winning all the elections, of which many elections were won unopposed.

While referring to UK’s exit from European Union by the end of January 2020, Siraj Teli suggested that the British Deputy High Commission and Karachi Chamber should form a Special Committee which must be given the task to review any issue likely to emerge after UK’s exit from EU that may affect businesses and accordingly give recommendations on how to deal with them in order to ensure smooth trade between the two countries.