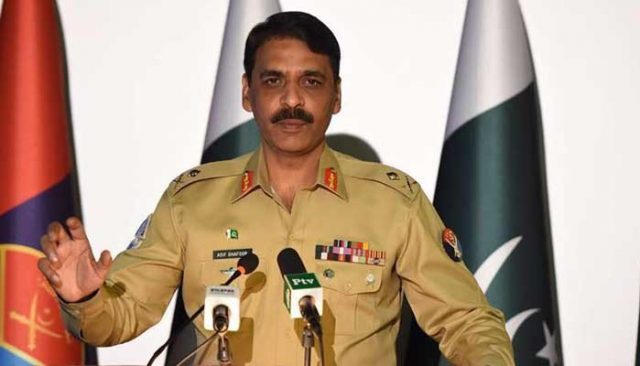 RAWALPINDI: Major General Asif Ghafoor, the director general of Inter-Services Public Relations (ISPR), has asserted that under no circumstances Pakistan’s land would be allowed to use against anyone.

In his talk to a local TV channel, Mr Ghafoor referred to the US drone strike on Iranian General Qassim Soleimani at Baghdad Airport on Friday by stating that after the attack geopolitical changes have emerged in the region.

Importantly, he quoted Prime Minister Imran Khan and maintained that Pakistan will not be party to anyone or anything but will be a partner of peace and peace alone.

Maj Gen Ghafoor said that US Secretary of State Mike Pompeo had spoken to Chief of Army Staff (COAS) General Qamar Javed Bajwa who told the US official that the regional situation had been improving, and asked him that tensions between countries of the region should be reduced. He said all relevant countries should move forward with constructive practices and dialogue.

“Pakistan will support all peaceful efforts and hopes the region doesn’t go towards another war,” he quoted the army chief as saying.

Responding to a question regarding rumours that Pakistan would participate in the war by supporting the United States against Iran, Ghafoor said such rumours were circulating on social media. He clarified, however, that this was not the first call [between Pompeo and Gen Bajwa].

He further emphasised on General Bajwa’s role for improving regional ties, and urged the general public and the media to pay attention towards reliable sources (for getting information).

“They should not pay attention to propaganda and rumours of enemies of the country […] India is playing the lead role in spreading these rumours,” he urged, while adding that he had read an Indian news article that Pakistan had ditched Iran.

“Our region had been struggling for the last four decades for attaining peace, and had been facing security issues,” he added.

He further recalled that Pakistan had played a vital role in the Afghan reconciliation process, and the Pakistan Armed Forces had eradicated terrorism from the country.

“Pakistan has done everything for achieving peace in the region, and will play an active role [in the future] for peace,” he stated.

Regarding Indian army chief Manoj Mukund Naravane’s recent statement about Pakistan, the ISPR stated that the remarks were “irresponsible”.

“Indian army chief wants to enhance his position by statements […] Pakistan Army knows defense of the country,” he added. Mr Ghafoor said that Pakistan Army has proved its capability against India.