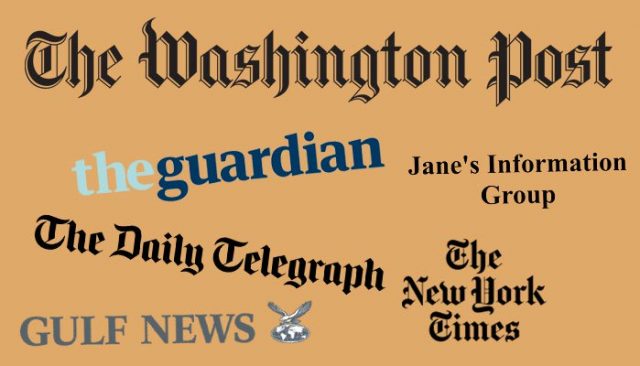 India on Tuesday had claimed to have demolished an alleged terrorist camp as it violated Pakistan’s Line of Control (LoC).

Indian aircraft had intruded Pakistani airspace and were forced to return owing to the timely response of the Pakistan Air Force. However, Indian leaders claimed to have hit an alleged terrorist camp and caused heavy casualties.

Pakistan rejected the Indian claims as did locals in the area and international media.

International media discredited Indian media’s claims of destroying a camp of a “large number of terrorists” in the territory.

Here are some excerpt from the international media refuting Indian claims:

New York Times: “The view that little had been damaged was supported by military analysts and two Western security officials, who said that any militant training areas at the site, in the Pakistani province of (KPK), had long since packed up or dispersed. Balakot and its surrounding area hosted numerous militant training camps until 2005, when a powerful earthquake struck the area, devastating its towns and villages. As international aid groups poured in to provide relief, militants packed up their camps and went elsewhere, to avoid being detected”.

London-based Jane’s Information Group, which tracks the defense industry: “a lot of intelligence sources say those camps in Pakistan had been cleaned out .. This is more political symbolism than anything else. Mr. Modi had to show some demonstrable action on India’s part, ahead of elections.”

Washington Post: “Initial reports from local police officials and residents who spoke on the condition of anonymity confirmed that a strike took place in a mountainous area a few miles outside town, but they said they saw no signs of mass casualties.”

Daily Telegraph: “Villagers in the area told Reuters they heard four loud bangs in the early hours of Tuesday but reported only one person wounded by shrapnel. “We saw trees fallen down and one house damaged and four craters where the bombs had fallen,” said Mohammad Ajmal, a 25-year-old who visited the site.”

The Guardian: “The attack was celebrated in India, but it was unclear on Tuesday whether anything significant had been struck by the fighter jets, or whether the operation had been carefully calibrated to ease popular anger over the 14 February suicide bombing without drawing a major Pakistani reprisal. Local media in Pakistan as well as Reuters quoted residents of Balakot who said they heard four to five blasts overnight which damaged homes and left large pockmarks in the ground.”

Gulf News: “From what villagers could see, the Indian attack had missed its target as the bombs dropped exploded about a kilometre away from the madrasa. Fida Hussain Shah, a 46 year-old farmer, said he and other villagers had found pieces of Indian ordnance that had splintered pine trees on the hill but the only casualty was a man sleeping in his house when shrapnel broke the windows.”

Police arrest hundreds of people ahead of SC’s verdict on India’s...