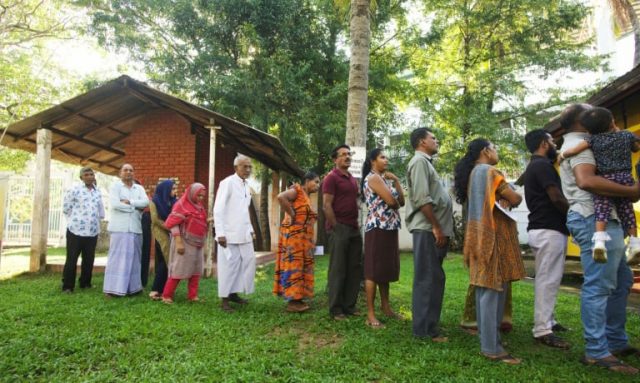 Gunmen fired at buses carrying minority Muslim voters on Saturday as Sri Lankans elected a new president, with the powerful Rajapaksa clan eyeing a comeback seven months after the island was hit by extremist attacks.

Minority Tamils and Muslims are seen as crucial in the close election, and Saturday’s attack in the northwest of the island — in which no one was injured — was likely aimed at deterring people from voting.

The assailants set fire to tyres on the road and set up makeshift roadblocks before shooting at and pelting with stones two vehicles in the convoy of more than 100 buses taking people to their home district to vote, police said.

In the Tamil-dominated northern peninsula of Jaffna, meanwhile, police said they arrested 10 men they suspected of “trying to create trouble”, while also complaining that the army had illegally set up roadblocks that could stop people getting to polling stations.

Such tactics are nothing new in Sri Lanka, which emerged from a horrific civil war only a decade ago. At the 2015 election, there was a series of explosions in the region that activists said were aimed at reducing turnout.

This time, there were long queues outside polling stations even before voting began.

Supporters from rival parties, meanwhile, clashed in a tea plantation area 90 kilometres east of the capital Colombo, with two people taken to hospital with knife wounds, the election commission said.

Some 85,000 police were on duty for the election with a record 35 candidates running for president, an office with considerable power similar to the French political system, with close to 16 million eligible voters.

IBM announced to acquire Red Hat in a deal valued at...