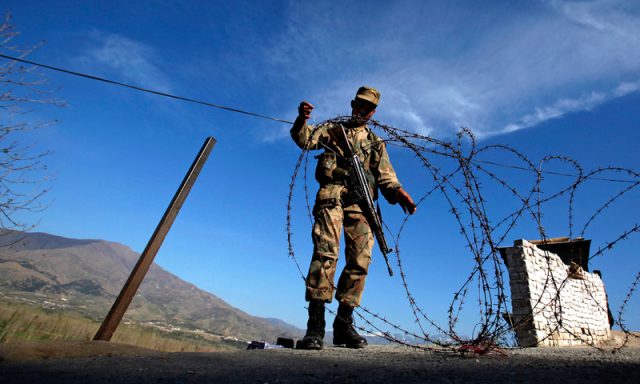 Owing to the indiscriminate and unprovoked shelling of the Indian troops, an ex-army man lost his life and his teenaged daughter and three other civilians were injured in Azad Jammu and Kashmir (AJK) on Saturday, officials said.

According to the Inter Service Public Relations (ISPR), the casualties occurred in Abbaspur tehsil of Poonch district, where Indian troops resorted to heavy shelling, using mortar and artillery, at about 3pm, the officials said, adding that the shelling continued till evening.

Pakistani Army refers to this area as Chirikot sector, which also extends to the neighbouring Haveli district.

The ISPR said that an innocent citizen, Mir Muhammad, died while a woman sustained injuries due to the Indian shelling. Local officials put the number of injured at four.

Qazi Arsalan, an official at Abbaspur police station, told Dawn that the 65-year-old deceased, Mir Muhammad, who was a retired havildar, died on the spot when a mortar shell landed in his house in Polas Kakuta village.

His 17-year-old daughter, Ismat Naz, was seriously injured, he added.

He said that Khadija Begum, 45, was also seriously injured in the same village.

According to him, Indian troops had also targeted a Suzuki van near Chirikot village while it was on its way to the town of Abbaspur with three persons on board, leaving two of them injured.

The injured were identified as Haseeb Farooq, 22, and Nazarat, 20, residents of Dharriyan village in Abbaspur.

Quoting the third rider who escaped unhurt, Arsalan told Dawn that around a dozen shells landed on different sides of their van, forcing them to abandon it and rush towards safety in the adjacent foresh.

However, two of them were hit by splinters from the shells while trying to hide behind trees, he said.

Saira Yousuf Chughtai, an Abbaspur-based journalist, told Dawn that the Indian shelling was indiscriminate, causing panic among the residents in the highly vulnerable areas along the LoC.

“I am afraid there might be more casualties but since there is no communication link with the affected villages, complete information of losses is yet to reach us,” she said.

“This is the height of cowardice on the part of the Indian army to deliberately pound innocent and unarmed civilians and warrants immediate international condemnation,” he said in a statement.

“It’s high time the United Nations and big powers rein in India and force her to implement the Security Council resolutions on Kashmir in the interest of regional and global peace.”

Officials say that ceasefire violations by India, in a serious breach of a truce agreement signed in November 2003, have been causing civilian casualties in different areas of AJK.

Only last week, four civilians were injured in Leepa valley of Muzaffarabad division due to heavy Indian shelling.

According to the State Disaster Management Authority, since the onset of the current year, two civilians have lost their lives and another 11 were wounded in AJK due to Indian firing.

Staff Reporter - February 21, 2020 0
KARACHI: The University of Karachi is organizing a two-day long International Seerah Conference 2020 from Saturday (today). The inaugural session of the...