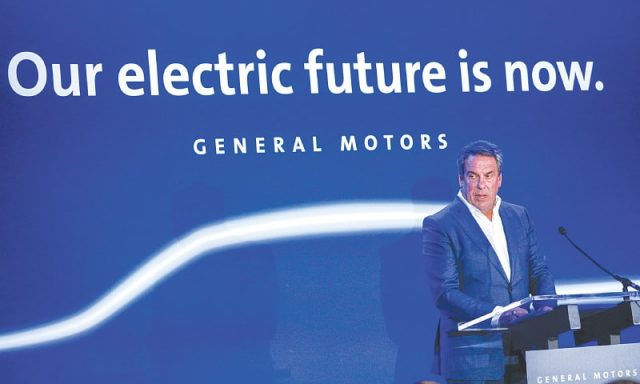 DETROIT: General Motors (GM) said one of its US manufacturing plant set for closure will instead shift to producing new electric trucks and SUVs.

The US auto giant ann­ounced a massive restructuring in 2018 that would have slashed 15pc of its workforce to save $6 billion, a move criticised by President Donald Trump as “nasty” because it would have required shuttering several manufacturing facilities in North America.

The Detroit-Hamtramck assembly plant in Michigan was scheduled to close, but now will produce two new electric vehicles (EV) starting in late 2021, a pickup truck and the Cruise Origin autonomous shuttle vehicle, the company announced.

“Our electric vehicle plan is unmatched in the industry,” GM President Mark Reuss said at a press conference in Detroit. “Ham­tra­mck will be GM’s first dedicated all EV assembly plant.”

GM is investing $2.2bn in the plant which currently employs about 900 workers, along with $800 million in projects related to the new model, the company said in a statement.

The project will generate more than 2,200 jobs when Hamtramck is fully operational, the company said. The plant will be idled for several months beginning at the end of February as the renovations begin.

The move comes after GM announced in 2017 it would launch 20 electric cars by 2023 as part of a push for an “all-electric” fleet amid demands from governments worldwide for greater automobile fuel efficiency.

General Motors reported a decline in US auto sales at the end of the fourth quarter, the lingering effect of a bruising 40-day strike by the United Auto Workers that dented its vehicle inventory.

The labor union cheered the news that the plant will remain open.

“Over 2,200 jobs and a new technology product will deliver job security and a bright economic future for UAW members for decades to come at Hamtramck,” UAW Vice President Terry Dittes said in a statement.