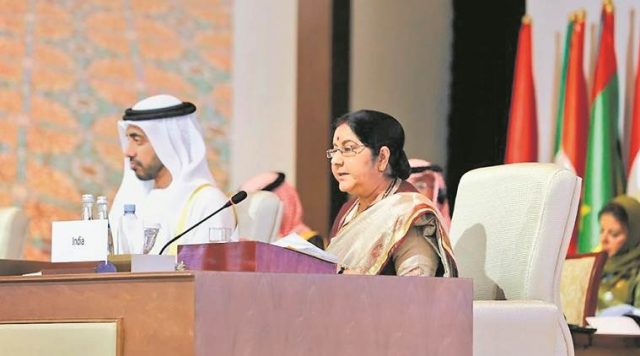 The Indian government rejecting the OIC’s statement said, “Jammu &Kashmir is an “integral part of India and is a matter strictly internal to India”.

“As regards the resolutions on Jammu and Kashmir, our stand is consistent and well known. We reaffirm that Jammu & Kashmir is an integral part of India and is a matter strictly internal to India,” the Ministry of External Affairs’ official spokesperson, Raveesh Kumar, said on Saturday.

A day after External Affairs Minister Sushma Swaraj attended the Organisation of Islamic Cooperation (OIC) summit, a resolution adopted by the organisation condemned “atrocities and human rights violations” in Kashmir — a standard template for all OIC statements over the last several decades, India media reported.

Kumar said Swaraj attended the OIC session in Abu Dhabi on Friday as the guest of honour, and “we deeply appreciate this historic gesture on the 50th anniversary of their first meeting”.

The Kashmir resolution had the phrase “Indian terrorism” in Kashmir — the last time the resolution mentioned “wicked terrorist act”.

Pakistan did not attend the plenary session, which was addressed by Swaraj on Friday. The Abu Dhabi declaration welcomed the positive initiative undertaken by Pakistan PM Imran Khan to hand over IAF pilot Abhinandan Varthaman as a gesture of goodwill to de-escalate tension in the region.

In a resolution, OIC member-states reiterated that J&K remains the core dispute between Pakistan and India, and its resolution is indispensable for peace in South Asia.

When asked, UAE Foreign Minister Sheikh Abdullah bin Zayed Al Nahyan said, “Let’s look at it from the positive angle. I think OIC has sent a very clear and positive sign to India…that OIC appreciates the relationship with India and looks forward to strengthening such a relationship to a point where we can embrace India one day in OIC. I know we are not there yet for obvious reasons but what I can say (is) that having India as a guest of honour was a historic moment for the OIC.”