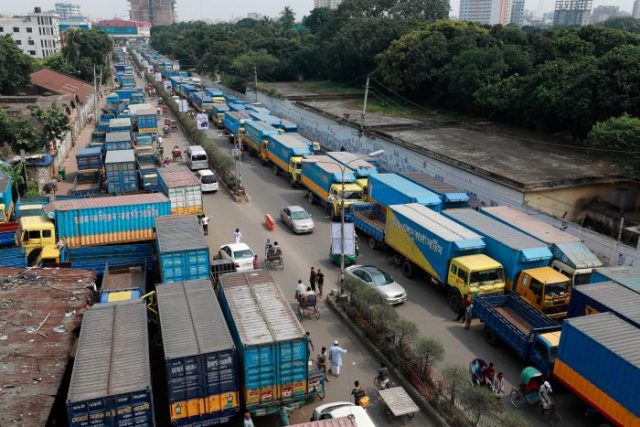 The strike, which was called on a week earlier, caused a monetary loss of over Rs 250 billion and triggered the return of at least two vessels en-route to Pakistan, said country’s exporters

KARACHI: The ongoing transporters’ strike is a severe blow to all sincere efforts being made by the exporters of PFVA to enhance export of our country.

“All export containers of Kinnow, Potato & Onion are stand still en-route from Punjab/Sindh to Karachi seaport,” an exporter said.

These export containers worth of $1.5 being referred in nature are operating either from the main electric supply or stand-by generators for maintaining a specific temperature to ensure the quality of perishable cargo remain intact.

However, it’s becoming difficult to ensure continuous supply of electric power either from the mains supply or stand-by generators due to frequent power interruptions and breakdown of the generators due to excessive running without any rest to the machinery which in turn is going affect quality badly as consistency in maintaining the required temperature cannot be ensured.

The big question is can we afford to let this strike continue without any official intervention to safeguard our national interest which has to be on top of everything?

The strike, which was called on a week earlier, caused a monetary loss of over Rs 250 billion and triggered the return of at least two vessels en-route to Pakistan. Exporters also lost several customers in overseas markets.

Cargo supplies across the country came to a halt during the start of the week when transporters suspended their operations in protest over a hefty increase in fines.

The efforts of government team led by governor Punjab Choudhry Sarwar –Jahangir Tareen and governor Sindh have so far failed to resolve the issue and end the strike. The deadlock persists on the issue of hefty fines.

According to the PHMA chairman, Karachi ports handle about 9,827 containers daily, including 4,665 export containers and 5,162 import containers. He voiced fear that if the strike was not called off, exports worth Rs 10 billion could be affected on a daily basis, which would deal a major blow to the government’s goal of enhancing exports to narrow the trade gap.

Recently, the National Highway Authority (NHA), which operates under the ministry of communication, increased the fines 10 times for rules violations, said United Goods Transport Alliance Chairman Ghulam Yaseen, citing an example, he said a previous fine of Rs 500 had now been raised to Rs 5000.

On the other hand, the NHMP said that higher penalties on traffic violations were resulting in safer road and lesser violation by the heavy traffic which most of the time caused fatal accidents.

Tax evaders to start facing implications all over the country, warns...