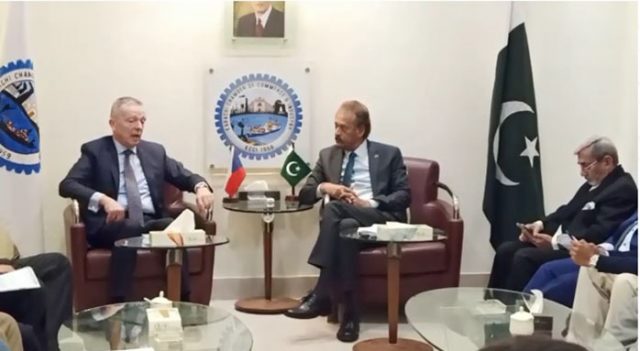 KARACHI: The Ambassador of Czech Republic Tomas Smetanka has assured that Czech Embassy would try its best and strive hard to provide as accurate information about Pakistan as they can to the Czech businesses, investors and anyone who might have slightest interest in Pakistan’s market with a view to promote trade and investment ties between the two countries.

“It is something which is missing. We do receive what the world press occasionally writes about Pakistan but people and investors in Czech Republic are not very sure about how safe or not safe is Pakistan. Our intention is to be as reliable and as accurate as possible”, he added while exchanging views at a meeting during his visit to the Karachi Chamber of Commerce & Industry.

Czech Ambassador mentioned that during the last three to four years, the trade exchange stood at around US$200 million per annum, of which one third was Czech exports to Pakistan while two-third was Pakistan’s export to Czech Republic. “It means we get more from Pakistan than we export which is partly because of the GSP Plus that has facilitated Pakistan’s exports to European Union. The next step will be to raise our exports to Pakistan and we will also be enhancing cooperation with the business community of Karachi Chamber to promote trade”, he added.

Identifying some areas of cooperation, the Envoy said that Czech Republic has been producing a lot of sophisticated machineries, weapons, passenger cars, transport system etc. but a very small portion of this huge production was being exported to Pakistan which needs to be focused.

He said that Czech Republic’s industrial ratio to overall GDP was the highest not just in European Union but the highest in the world. “We have the highest industrial production and are was very much an export oriented country. We can also help Pakistan in effective water management, water purification, environmental technologies, green technologies and waste management which are quite important for Pakistan.”

Tomas Smetanka was of the opinion that as Karachi was the hub of businesses and entrepreneurship, he will be looking forward to repeatedly visit this city to seek business community’s input and get something implemented to promote trade and investment.

President KCCI Agha Shahab Ahmed Khan, while commenting on bilateral trade between Pakistan and Czech Republic, appreciated Czech Republic’s its invaluable and unstinting support extended to Pakistan for its graduation to the Generalized Scheme of Preferences (GSP) Plus Status.