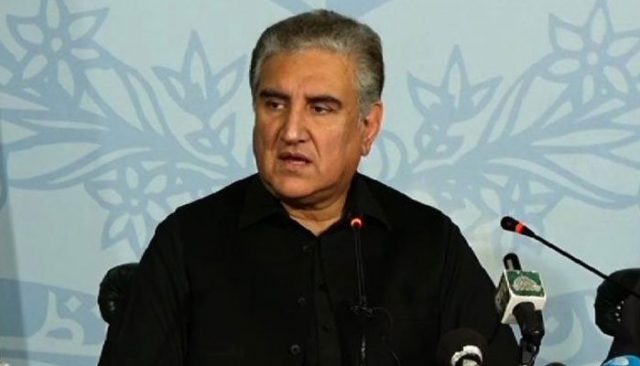 ISLAMABAD: Foreign Minister Shah Mehmood Qureshi on Sunday said that a “befitting response” is being given to India’s ceasefire violations along the Line of Control (LoC), resulting in large number of casualties to Indian soldiers.

Several Indian checkposts involved in the cross-border firing have also been damaged by the brave Pakistani troops, he said in a statement.

Besides ceasefire violations, Qureshi said, Prime Minister Narendra Modi’s government can also resort to a “false flag operation” to divert world’s attention from violent protests being carried out across India against the anti-Muslim Citizenship Act.

Foreign Minister Qureshi said that he has already informed the UN Security Council about Pakistan’s apprehensions in his letter written on December 12. He once again urged the international community to take notice of dangerous steps being taken by the Indian government, which he added, are adversely affecting peace in the region.

In his Dec 12 letter, Foreign Minister Qureshi had urged the UNSC president to convene a session at the earliest to discuss the recent Indian actions along the LoC.

The statement comes a day after Prime Minister Imran Khan warned the international community that if India staged a false flag operation, then it would receive a “befitting response” from Pakistan.

Frustrated by its failure to deal with escalating raging violent protests over the highly divisive new citizenship law, the Narendra Modi-led government could stage a ‘false flag operation’ in an attempt to fire up Hindu nationalism against Pakistan – something he has repeatedly done in the past for political gains.

In a series of tweets, Premier Imran said that during the past five years, Modi’s government had been taking India towards Hindu Rashtra with its Hindutva supremacist and fascist ideology. He added that India could resort to a false flag operation to divert attention from domestic chaos and whip up war hysteria to mobilise Hindu nationalism.

“Now, with the Citizens Amendment Act, all those Indians who want a pluralist India are beginning to protest and it is becoming a mass movement,” he said. “At the same time the siege by Indian occupation forces in IOJ&K continues and a bloodbath can be expected when it is lifted,” he added.

The Modi government stripped Indian Occupied Jammu and Kashmir (IOJ&K) of its constitutional semi-autonomous status on August 5 and clamped a draconian curfew which remains in place ever since with millions of Kashmiris literally cut off from the rest of the world.