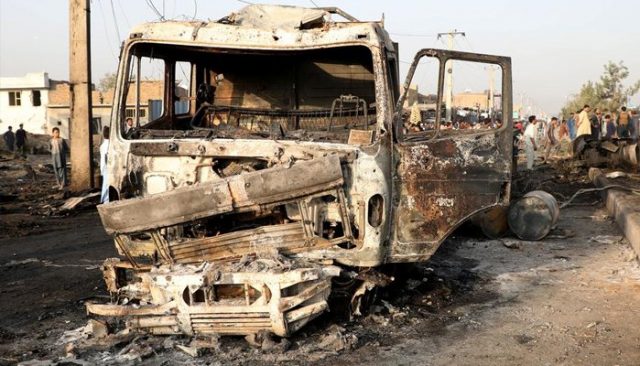 KABUL/JALALABAD: A suicide bomb targeted a minibus of recruits for the Afghan security forces in the eastern city of Jalalabad on Monday, killing at least three people and injuring 27, a local government source said.

The recruits were travelling to Kabul, said Sohrab Qaderi, a member of the Nangarhar provincial council. The bomb detonated in a small motorised vehicle used to haul goods.

Last month, a car bomb attack targeted an intelligence services building in Qalat, leaving at least 10 dead and 85 wounded, the governor of Zabul province had confirmed.

The blast in Zabul was the latest in a string of deadly Taliban bombings across Afghanistan — Taliban suicide bombers had killed 48 people in two separate attacks in Afghanistan two days prior, the deadliest at an election rally by President Ashraf Ghani — as violence intensified after US President Donald Trump abruptly ended talks with the Taliban over an American withdrawal from the country.

The attacks had happened 11 days before Afghanistan’s presidential election — which Taliban commanders have vowed to violently disrupt — and followed the collapsed peace talks. Agencies