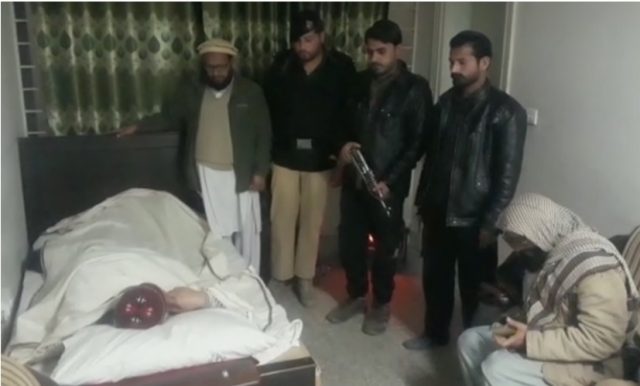 With Kifayatullah, two of his sons — Shabbir Mufti, Hussain Mufti — and friend Jan Mohammad were injured in the attack. According to news, police spokesman Mohammad Sohail confirmed.

According to medics, the injured JUI-F leader had sustained injuries on his back, hand and other parts of his body.

Following the incident, Kifayatullah’s son Hussain lodged the First Information Report (FIR) at City police station under Section 324 (attempt to murder), 341 (punishment for wrongful restraint), 427 (mischief causing damage to the amount of fifty rupees), 148 (rioting, armed with deadly weapon) and 149 (every member of unlawful assembly guilty of offence committed in prosecution of common object) of the Pakistan Penal Code (PPC).

Hussain said that attackers had intercepted their vehicle and attacked them iron rods.

“Attackers are those against whom Mufti sahib speaks publicly and we moved police for [an] FIR against [the] unknown attackers,” Kifayatullah’s elder brother, Habibur Rehman said.

According to Rehman, Kifayatullah was on his way to Mansehra from Islamabad when a group of people in two vehicles intercepted the car at Baidra road and attacked them.

“Though attackers didn’t want to eliminate Mufti Kifaytullah and his sons, it was a strong message for him not to speak against them,” said Rehman.

Last month, Kifayatullah was taken into custody for 30 days under Section 3 (power to arrest and detain suspected persons) of the Maintenance of Public Order (MPO) and shifted to Haripur jail.

Following this, the Peshawar High Court had ordered his release on bail.