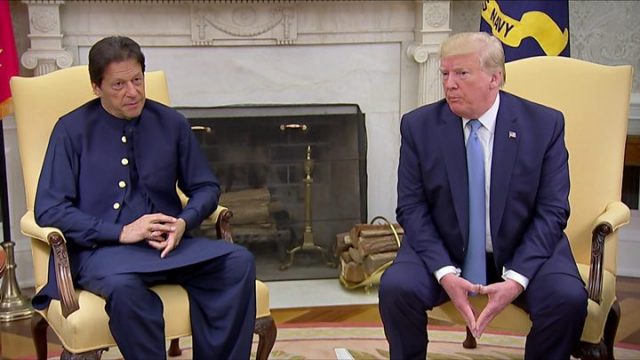 President Donald Trump said the United States was watching developments between India and Pakistan over Kashmir “very closely” and was prepared to help if necessary.

Speaking ahead of talks with Pakistan Prime Minister Imran Khan on the sidelines of the World Economic Forum, Trump said trade and borders were both critical points for discussion, while Khan said that for him Afghanistan was the top priority.

This is the third meeting of the two leaders in less than a year amid reports that the US and Afghan Taliban are close to striking a peace deal after over yearlong painstaking process.

“Trade is going to be of very, very paramount importance … and we’re working together on some borders, and we’re talking about Kashmir in relation to what is going on with Pakistan and India. And if we can help we certainly will be helping,” said the US president.

“We’ve been watching that and following it very, very closely,” he added.

On August 5 last year, India had stripped Occupied Kashmir of the special autonomy it had for seven decades through a rushed presidential order.

Kashmiris see the move as an attempt to dilute the demographics of Muslim-majority Kashmir with Hindu settlers.

Pakistan had strongly condemned the move and vowed to “exercise all possible options to counter the illegal steps” taken by New Delhi.

Khan, an international cricketer before turning to politics, said that while relations with India were important, the most pressing concern was Afghanistan.

“The main issue, of course, is Afghanistan because it concerns the US and Pakistan,” he said. “Both of us are interested in peace there and an orderly transition in Afghanistan with talks with the Taliban and the government.”

Khan is one of at least three leaders Trump is scheduled to meet at Davos. The others include European Commission President Ursula von der Leyen and Iraqi President Barham Salih.

SC verdicts regarding Aasia Bibi was according to law