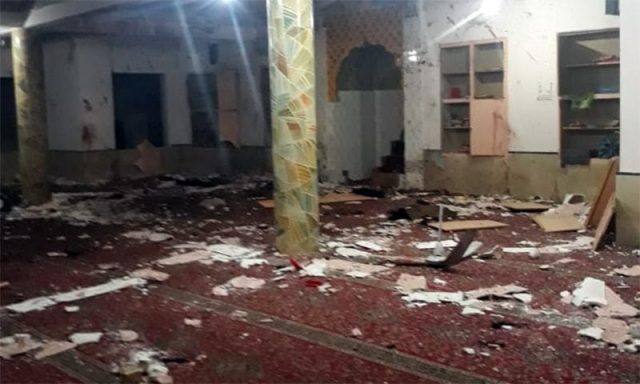 According to Quetta Deputy Inspector General (DIG) Abdul Razzaq Cheema and hospital sources, Deputy Superintendent of Police (DSP) Amanullah and the mosque’s imam were among the deceased.

A senior police officer who asked not to be named told DawnNewsTV that the attack was carried out by a suicide bomber, according to Dawn news.

A spokesman for the Balochistan government, Liaqat Shahwani, also confirmed to AFP that a suicide bomber was to blame.

The injured and the deceased were shifted to Quetta’s Civil Hospital while an emergency was imposed in all hospitals of the city.

Bomb disposal squad (BDS) and security personnel combed through the mosque and its surrounding vicinity for evidence and the area was cordoned off. The mosque is located in a densely populated Pashtun-majority neighbourhood.

Fida Mohammad, who was attending the Maghrib prayers, said about 60 people were present at the time of the attack on the mosque, located in Ghousabad neighbourhood.

The explosion ripped through the front row of worshippers seconds after the prayer began, he told AFP.

“It was a powerful blast, people were screaming and running here and there — many people were injured because of the stampede,” Mohammad said.

TV footage of the explosion’s aftermath showed debris and shattered glass strewn on the floor at the scene.

No one immediately claimed responsibility for the bombing.

The incident comes nearly a month after the son of DSP Amanullah, who was martyred in today’s explosion, was shot dead.

DIG Cheema, while speaking to media, said that police had almost completed the investigation into Najeebullah’s killing. He added that they will now ascertain whether the same group was behind both the attacks.

Meanwhile, the director general of the Inter-Services Public Relations, Maj Gen Asif Ghafoor, tweeted that Frontier Corps personnel had reached the blast site and were carrying out a search operation along with police. “Every possible assistance be given to police and civil administration,” the tweet quoted Army Chief Gen Qamar Javed Bajwa as saying, adding that “those who targeted innocents in a mosque can never be true Muslim.”