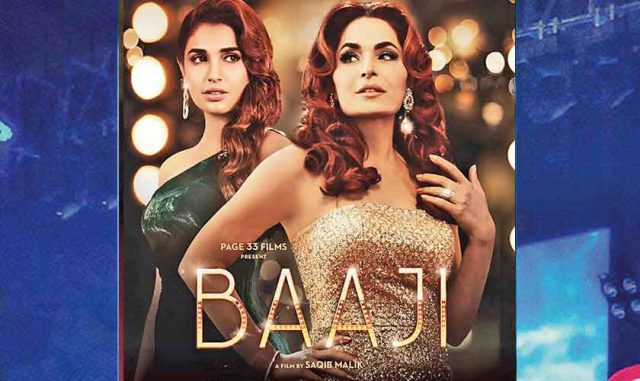 Ad and music video director Saqib Malik is all set to make his mark in the world of cinema with his much anticipated and talked about first venture, titled “Baaji”.

“Baaji” has been creating a strong buzz since it was announced last year. The film’s intriguing storyline, the ensemble cast and most of all a powerful  role for Meera , being touted as her comeback, have all led to “Baaji” titillating the imaginations of cinema audiences.

The Firsf Look of “Baaji” , revealed on social media on March 6th,  thus created an unprecedented flurry of excitement. The elegant poster featured an ultra glamourous Meera striking an alluring diva-like pose while Amna Ilyas stood next to her, with a subdued expression of awe. Eyes fixed on Meera and an enigmatic smile on her face, Amna’s look hinted at an intriguing deeper story– a feeling that there was more to it than meets the eye.

A sparkling background added a dose of style and mystique. Needless to say, both actors looked bewitching, with Meera wearing a shimmering gold Nomi Ansari dress and Amna adorned in a sexy dark green custom made Deepak Perwani creation, Aneela Mehmood styled the stars with hair and makeup by Fatima Noor at Depilex, while Tapu Javeri captured the stars on camera  with his magical eye. The D’hamidi Partnership designed the poster itself.

If the intense interest over the poster is anything to go by, “Baaji” has already become an event film of the year.

Presented by Page33 Films and ARY Films, with ARY distributing the venture, it looks like Baaji is set to take an iconic place in the revival of Pakistani cinema.