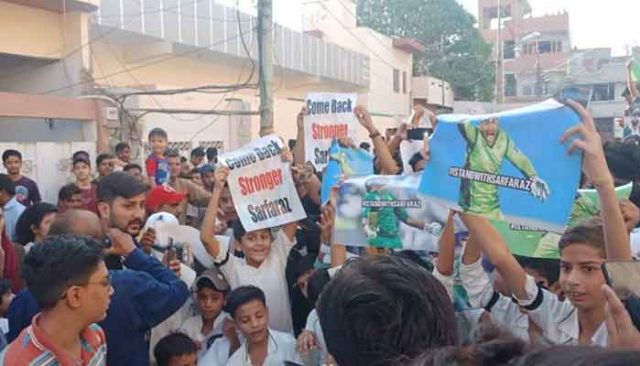 KARACHI:  Hundreds of cricket fans gathered outside the residence of Sarfaraz Ahmed to express solidarity with him against PCB’s decision to sack him as captain of Pakistan Cricket team.

They also chanted “Captain Ko Izzat Dou” slogans in Urdu, which means give respect to the captain.

The protest was organized by a group of students through a Facebook page which invited fans to gather outside the residence of Sarfaraz Ahmed in Karachi’s Bufferzone area.

Fans demanded Sarfaraz be reinstated as Pakistan’s captain, at least in the white-ball cricket as he was not bad in shorter format as captain.

They also demanded PCB treat all players equally on the basis of their performance.

“Some are given countless chances and some doesn’t even get one. If they are saying  Sarfaraz hasn’t been good with bat and gloves then on what performance players like Hassan Ali, Shadab Khan or Fakhar Zaman are retained,” a protester asked.

“The way Sarfaraz has been treated gives us the impression this is nothing but  victimization, and that’s why we all are here to express solidarity with him,” said another protester.

They also reminded PCB that it was Sarfaraz Ahmed who led 8th ranked team to Champions Trophy title while his predecessors had left the team in shambolic condition.

“Why Azhar Ali has been made captain. What was his performance as skipper previously and what has been his performance in the last few months,” asked a protester carrying poster demanding respectful treatment for Sarfaraz Ahmed.

“This was shocking to news to me,” he said while terming the decision to be unjustified and unfair.

The Pakistan Cricket Board last week sacked Sarfaraz Ahmed as captain of Pakistan team. He was also dropped from Pakistan’s squad for the tour of Australia.