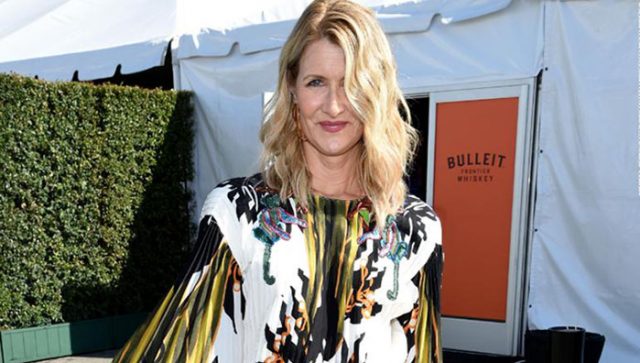 The 2020 Independent Spirit Awards celebrated countless excellent films, from “The Lighthouse” and “Booksmart” to “Uncut Gems” and “The Farewell.”

It also celebrated Laura Dern — because why not?

At one point in the show, hosted by Aubrey Plaza, the Gay Men’s Chorus of Los Angeles took the stage to “shine a spotlight” on moments from some of this year’s notable films that “you may not have realized were gay.”

Among the people and moments called out in the song? “Idina Menzel in ‘Uncut Gems,'” “J. Lo pole-dancing to Fiona Apple,” and several moments involving Dern’s character from “Marriage Story.”

As the choir sang, Dern, clearly amused, clapped enthusiastically. When the choir then began repeating her name as scenes from her previous films played on screen, her expression became one of pure delight.

“Did this…really happen?” Dern tweeted later. “Thank you @GMCLA @filmindependent and @JTfirstman for making me realize how much I need a choir to go everywhere with me!”

Dern has been on a streak this award season, picking up a Golden Globe, a SAG Award and a BAFTA for her role in the Netflix film.

‘Hair Love’ went from a Kickstarter to an Oscar winner

It was videos of black fathers lovingly styling their daughters’ hair that inspired Matthew Cherry to launch a Kickstarter campaign in 2017 fund the short film, “Hair Love.”

On Sunday, Cherry and Karen Rupert Toliver accepted the Academy Award for best animated short film for the project.

The story of a dad struggling to do his daughter’s hair not only charmed those who saw it, but resulted in a children’s book and plenty of conversations about the importance of hair and heritage in the black community.

“Hair Love was done because we wanted to see more representation in animation,” Cherry said during his acceptance speech. “We wanted to normalize black hair. There’s a very important issue that’s out there, the CROWN Act, and if we can’t help to get this passed in all 50 states it will help stories like DeAndre Arnold’s who’s our special guest tonight.”

Arnold, a senior at Barbers Hill High School in Mont Belvieu, Texas, and his mother, Sandy, were invited to attend the Oscars as the guests of Cherry and Rupert Toliver.

Black Americans more likely to die from COVID-19: US Data

Priests threaten to hold protests if Kedarnath film is not banned