KARACHI: Pak Suzuki Motor has announced to discontinue of all model of Mehran in Pakistan from April 1, 2019, says a company notification to all the dealers here on Monday. Suzuki Alto 660cc will replace Mehran 800 cc in Pakistan, the sources claimed.

In a letter, the company announced, “keeping in view of discontinuation of Suzuki Mehran production, Pak Suzuki is constrained to stop booking of Suzuki Mehran (all versions) with immediate effect from April 1, 2019.”

The company announcement further said, “all pending orders received till April 4, 2019 will be served within our commitment.” 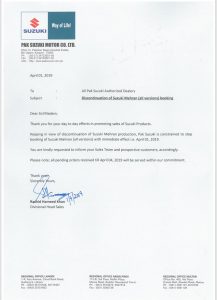 Suzuki Mehran was the Pakistan favourite most economical car. The world has revolutionized in terms of innovation and state of the art technology in the auto sector – electric vehicles (EVs) are the new growing trend across the globe.

Despite this, Pak Suzuki has somehow managed to keep selling its most popular vehicle in the country till now. A compact hatchback that still offers what it offered back in the 1990s when it was first launched, hasn’t changed at all.

This globally retired 2nd generation of Suzuki Mehran has lived for 30 years in Pakistan as it made its debut in the local market back in 1989. Besides all the facts, it remained as the top-selling car in Pakistan for 3 decades.

There are multiple reasons behind the success of Mehran. Lack of competition was the main reason why Mehran ruled the roost for all these years. Right towards the end of its life span, it costs around Rs 860,000 (ex-factory price) which is undoubtedly a huge question mark in terms of value for money.

Over the past few years, the automobile industry of Pakistan has welcomed several new entrants on the back of the government’s Automobile Development Policy (ADP) 2016-21 which included incentives for them.

Moreover, the imported hatchbacks in the country are growing by the day and people tend to prefer them on the basis of their build quality, outlook and most importantly features they offer.

On the other hand, the entry of United Bravo also triggered an alarm for Pak Suzuki and forced a change. Prince is also going to launch its Prince Pearl during some part of this year which would further strengthen the completion.

Pak Suzuki had already discontinued its VX variant of Mehran at the end of the last year. 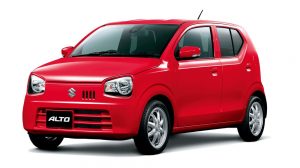 Pak Suzuki has reportedly started production of its 660cc Alto in Karachi.

The company is eyeing to launch Alto in Pakistan this year. According to industry sources, Suzuki has already developed around 25 units of the new Alto 2019 for testing purposes.

The new hatchback will come with a 660cc engine and both the auto and manual transmission will be available. There will be three variants of Alto 2019, where the top-of-the-line model will have an auto gearbox, but the manual Alto will be available with one base model and one higher spec model. According to an estimate, the price is also rumored to be between Rs 800,000 to Rs 1 million.

The Suzuki Alto is currently in its 8th generation, and we will be getting the same 8th gen shape in Pakistan as well, but the features may vary, and we might not get the same features available in the JDM Alto which people are already importing into the country, the sources said.

RD to be introduced for unregistered mobile phones