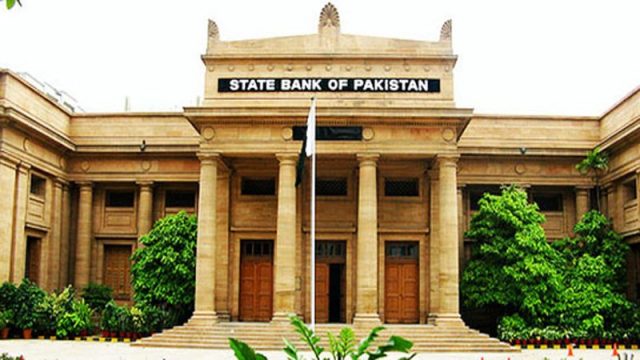 KARACHI: The Monetary Policy Committee (MPC) of State Bank of Pakistan (SBP) Tuesday decided to keep the policy rate unchanged at 13.25 percent as the previous policies of the SBP could not control the rising inflation of the country.

At its today’s meeting, the SBP said that the decision reflected the MPC’s view that “the outlook for inflation has remained broadly unchanged.”

On the one hand, recent inflation outturns have been on the high side and there remain near term risks to inflation primarily from food price shocks and potential increases in utility prices. On the other hand, several factors are expected to gradually moderate the pressure on inflation. These include the recent appreciation of the exchange rate after the introduction of the market-based exchange rate and ongoing fiscal consolidation.

On balance, the SBP’s projection for average inflation remained broadly unchanged at 11–12 percent for fiscal year 2019-20. The MPC also viewed the current monetary policy stance as appropriate to bring inflation down to the medium-term target range of 5–7 percent over the next six to eight quarters, the SBP said.

In reaching this decision, the MPC considered key developments in the real, external and fiscal sectors along with their projections, and the resulting outlook for monetary conditions and inflation.

The MPC noted three key developments since the last meeting on 22nd November 2019. First, the ongoing and substantial reduction in the current account deficit and the orderly conditions in the foreign exchange market after the transition to a market-based exchange rate system continued to strengthen the country’s external accounts. Second, the IBA-SBP survey of business confidence showed an improvement in the business community’s outlook for economic activity for a third successive wave. Third, fiscal developments remained on track and in line with commitments made under the IMF-supported program, buoying the overall economic reform sentiment.

The latest production estimates of major crops indicate that all Kharif crops, except cotton, grew in line with expectations. Cotton production has been revised downward due to adverse supply side shocks. Large scale manufacturing (LSM) indicates that economic activity is strengthening in export-oriented and import-competing industries, while inward-oriented industries continue to slow down.

Specifically, LSM showed gains in textiles, leather products, engineering goods, rubber products, cement and fertilizer, and declines in auto, electronics, food, chemicals, and petroleum products. Primarily on account of adverse supply side shocks to cotton production as well as the contraction in LSM to date, SBP’s projection for real GDP growth for FY20 is likely to be revised downward. Nevertheless, available monthly indicators of activity show that the slowdown in most economic sectors appears to have bottomed-out, and a gradual recovery is expected in the coming months.

The current account deficit contracted by 75 percent to $2.15 billion during the first half of FY20 due to a notable reduction in imports and modest growth in both exports and workers’ remittances. Importantly, export volumes of major items including rice, value-added textiles, leather products, and fish and meat, exhibited a notable increase during Jul-Dec FY20.

This reflects the benefits of a more competitive exchange rate and take-up of incentive credit schemes for export-oriented sectors. The capital account also continued to strengthen, with continued inflows of foreign portfolio investment and foreign direct investment.

These favorable developments facilitated the SBP to build up its foreign exchange reserves despite making a repayment of $1.0 billion international Sukuk in early December 2019. SBP’s foreign reserves increased from $7.28 billion at end-June 2019 to $11.73 billion as of 17th January 2020, an increase of $4.45 billion, and SBP’s short liabilities fell by $3.82 billion in the first six months of FY20. These developments have significantly improved the SBP’s net international reserves (NIR) position.

The MPC noted that recent foreign portfolio inflows reflect international investors’ improved perceptions of Pakistan’s credit worthiness. Such inflows reduce the interest rate on government debt due to the greater demand for government securities, deepen capital markets, and free up domestic banks’ resources for lending to the private sector. The MPC noted the bulk of the improvement in the SBP’s reserve adequacy stemmed from the improvement in the current account—not portfolio inflows—and current inflows comprised only 3.8 percent of total marketable government debt. As such, inflows at current levels represented limited risks. The MPC noted that the SBP continues to monitor developments carefully and has more than adequate buffers to manage any outflows in an orderly manner. The MPC noted that monetary policy would continue to be based on the medium-term outlook for inflation.

Fiscal consolidation has remained on track during the year to date and has supported a qualitative improvement in the inflation outlook. During the first half of FY20, tax revenue collections showed a healthy increase of 16 percent over the same period last year. On the expenditure side, while non-interest current expenditures have been strictly controlled, the federal releases for public sector development programs (PSDP) stood at Rs 300 billion in H1-FY20 as compared to Rs 187 billion in the same period last year. This increased public spending is expected to support business activity, especially in construction-allied industries. From the monetary policy perspective, the MPC emphasized that the continuation of fiscal prudence would remain critical for effective anchoring of market sentiment and improving the inflation outlook.

The MPC noted that recent inflation outturns have been on the higher side. National CPI inflation rose to 12.7 and 12.6 percent (on y/y basis) in November and December 2019, largely reflecting sharp increases in selected food items on account of temporary supply disruptions and upward adjustments in administered prices. If sustained, high food price inflation could lead to demands for faster wage growth and to possible risks of a wage-price inflation spiral. However, available evidence suggests that such second-round effects on inflation from supply side shocks have not materialized and inflation expectations remain broadly anchored. Consequently, the MPC viewed the latest increases in CPI as primarily transitory in nature. The MPC noted that real interest rates on a forward-looking basis were not high compared to other emerging markets and from the perspective of Pakistan’s own experience.

PM should have a consultative session with business leaders every three...