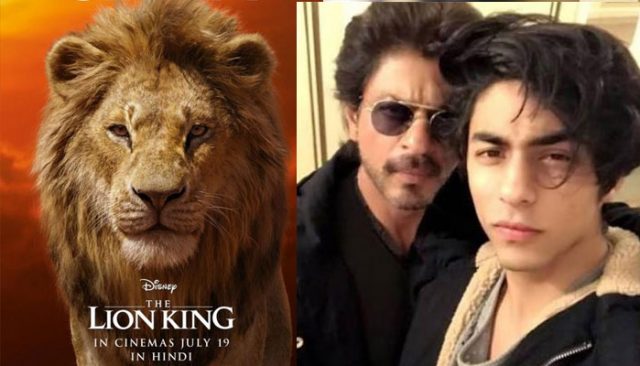 Movie aficionados and Bollywood buffs were taken aback after Shah Rukh Khan and his son Aryan Khan, revealed that they will be dubbing for the upcoming live-action Hollywood film, ‘The Lion King’.

When the news broke out that the father-son duo will be voicing the characters of King Mufasa and Simba in the Hindi version of ‘The Lion King’, fans could not contain their exhilaration.

Earlier today, the ‘Zero’ actor posted the snippet of Simba from the film with the caption, “Mera Simba”, and fans were quick to draw comparisons between the two and the on-screen characters they essayed.

The proud father also tweeted on behalf of his son Aryan Khan and expressed gratitude to all the fans for their immense love.

“Young Lions don’t tweet so on behalf of Simba #AryanKhan I want to thank u all for appreciating his effort. Also thx to @disneyfilmindia & the team at Sound & Vision ( Mona & Mayur gang) & doesn’t his voice sound a bit familiar? Or is it just me?”

Director-Producer Karan Johar also tweeted after the trailer launch and seemed euphoric: “Pardon my excitement! But Aryan is the first born in our family!!! And even just hearing his voice has made me so so excited !!!!! And without a bias he sounds amazing!.”

‘The Lion King’ will be ready to roar in theaters on July 19 and is reported to have English, Hindi, Tamil and Telugu versions as well.