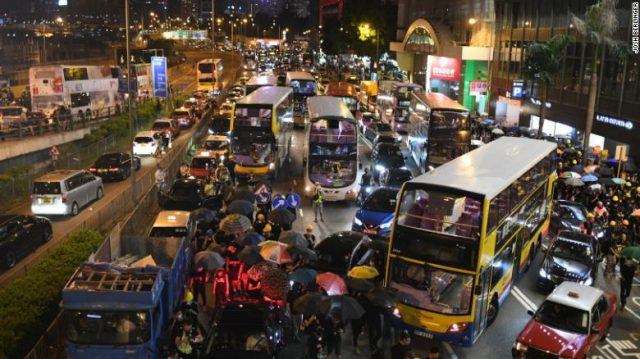 Cathay Pacific (CPCAY) urged customers not to fly Monday and Tuesday, and said it would waive fees for rebooking. Shares in Cathay plunged more than 4% during trading Monday.

The airline is the city’s flagship carrier. It flies about 34 million passengers every year and serves nearly 200 cities around the world from its hub at Hong Kong’s international airport.

Monday marked the fifth straight day of massive protests in Hong Kong. General strikes and demonstrations were planned for the day in seven districts.

Other protests and organized transit blocks were expected throughout the day, including at the airport and at the Cross-Harbour Tunnel, a vital traffic artery connecting Hong Kong island with Kowloon.

More than 2,300 aviation workers took part in the strike, including 1,200 Cathay cabin crew and pilots, according to the Hong Kong Confederation of Trade Unions.

Service was suspended for more than an hour Monday morning on the Airport Express, which is a line that zips people between the airport and the city center in under 25 minutes.

Hong Kong air space and runway capacity at the airport has been effectively reduced by 50% for all airlines, according to an internal Cathay Pacific memo seen by CNN that was sent to staff that supports pilots and ensures planes operate efficiently and on time.

Earlier Monday, the city’s airport authority said operations were “largely normal,” though it acknowledged that the terminal was “busier than usual.” Officials advised passengers to “proceed to the airport only when their seats and flight time have been confirmed.”

More than 74 million passengers traveled to and from Hong Kong’s international airport last year. The major Asian hub handles 1,100 passenger and cargo flights daily, with services between Hong Kong and about 200 international destinations.