ISLAMABAD: The Foreign Office on Friday dispelled the notion that Dr Maleeha Lodhi was removed as Pakistan’s Permanent Representative to the United Nations in New York for some reason.

“There is no truth whatsoever in insinuation that Dr Maleeha Lodhi was ‘removed’ for any reason,” Spokesperson Dr Muhammad Faisal tweeted. 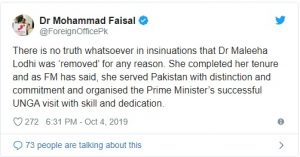 “She completed her tenure and as FM has said, she served Pakistan with distinction and commitment and organised the Prime Minister’s successful UNGA visit with skill and dedication,” he added.

In a major reshuffle on Sept 30, Prime Minister Imran Khan had appointed Ambassador Munir Akram as Permanent Representative of Pakistan to the United Nations in place of Dr Maleeha, according to a statement issued by the Foreign Office.

Prime Minister Khan also approved other key appointments as Khalil Ahmad Hashmi, who was serving as director general (UN) at the foreign ministry was appointed as Permanent Representative of Pakistan to the UN in Geneva.

PIA likely to start direct flights to US from next April