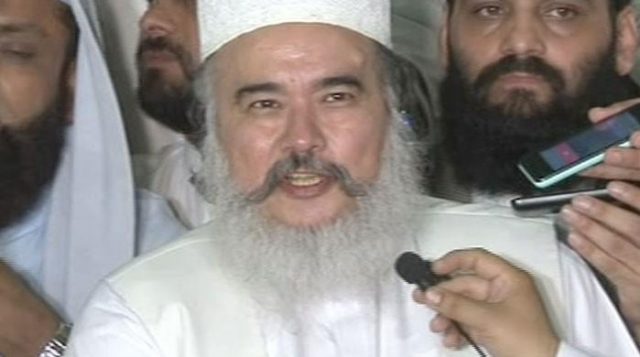 PESHAWAR: Mufti Shahabuddin Popalzai, a controversial cleric from Peshawar’s historic Masjid Qasim Ali Khan, has once again divided the nation by declaring that the holy month of Ramzan will start on Monday – hours after state’s central moon sighting committee declared that no crescent sighting was observed from any part of the country today.

According to Geo News, the self-imposed cleric said his decision was based on 22 evidences gathered by the mosque.

Earlier, Central Ruet-e-Hilal Committee Chairman Mufti Munibur Rehman said at a press conference that moon was not sighted and the first day of Ramzan will be on Tuesday, May 7.

The committee with Mufti Munib-ur-Rehman in the chair met in Karachi today for the sighting of the crescent of Ramzan-ul-Mubarak.

An official of the Ministry of Religious Affairs and Interfaith Harmony earlier told that other members of the committee have attended Zonal and District Ruet-e-Hilal Committees at their respective places.

The Pakistan Meteorological Department (PMD) had predicted the possibility of Ramzan moon sighting on the evening of May 6 (Monday), however, it was not the case.

Saudi Arabia and other countries in the Middle East were able to see the moon on May 5 and observe the first fast of the holy month on May 6.

South Asian neighbours Bangladesh, India and other countries in Asia and Africa will also sight the Ramzan moon on May 6 like Pakistan.

Next round of Kartarpur Corridor talks with India to be held...