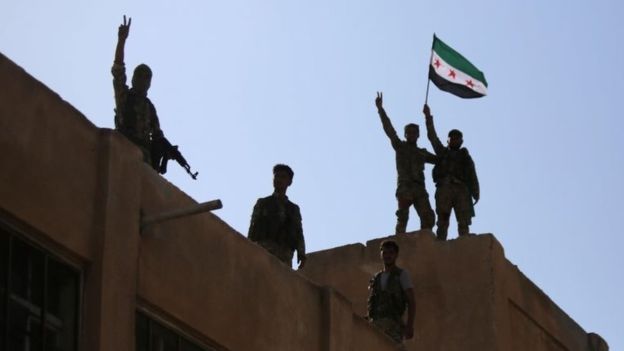 The US plans to evacuate 1,000 troops from northern Syria, as Turkey advances its operation against the Kurds, Defence Secretary Mark Esper has said.

According to BBC, separately, the Syrian army is sending troops to the north “to face” the Turkish forces, state media said.

Turkey launched its assault last week in a bid to drive Kurdish-led forces – key US allies – from the border region.

More than 130,000 people have fled homes near the conflict, the UN said, warning the figure could soon triple.

The Syrian Democratic Forces (SDF), the Kurdish-led fighters under attack from Turkey, warned last week that they would no longer be able to guard suspected IS members and their families in camps and prisons under their control if the Turkish offensive continued.

And on Sunday, Kurdish officials said nearly 800 relatives of foreign IS members had escaped from Ain Issa, a camp in the north, as clashes raged nearby.

The Turkish offensive has drawn an international outcry, as the SDF were the main Western allies in the battle against IS in Syria.

But Turkey views the Kurdish groups within the force as terrorists and says it wants to drive them away from a “safe zone” reaching 30km into Syria.

It plans to resettle more than three million Syrian refugees currently in Turkey within the zone – many of whom are not Kurds. Critics have warned this could lead to ethnic cleansing of the local Kurdish population.

What’s behind the US troops decision?

The situation in Syria is becoming “very untenable”, US Defence Secretary Mark Esper told CBS’s Face the Nation on Sunday.

“In the last 24 hours, we learned that [the Turks] likely intend to extend their attack further south than originally planned, and to the west,” he told CBS’s Face the Nation.

He said the decision to withdraw remaining US troops from northern Syria was made after discussions with his national security team and US President Donald Trump.

According to Mr Esper, the SDF are “looking to cut a deal” with the Syrian government and its Russian allies to counter the Turkish attack.

This, he said, would leave the US forces stuck between “two opposing advancing armies”.

He said he was unable to give a timeframe for the withdrawal and did not specify where the troops would be moved to next.

It was President Trump’s decision last week to move some US troops from pockets in the north-east of Syria that effectively triggered the Turkish incursion against the SDF.

The US defence secretary’s announcement of a “deliberate withdrawal” of US troops from northern Syria underscores the pace at which the situation on the ground is deteriorating.

Amid heavy fighting, wayward shelling, alleged war crimes, and reports of IS supporters breaking out from camps and holding centres, Washington has clearly decided it cannot stand against Turkey’s determination to see this operation through.

Interestingly, Mark Esper also noted that in the past 24 hours the US has learned that the Turks “likely intend to expand their attack further south than originally planned and to the west.”

This is clearly what is seen as threatening US forces, and it risks additional humanitarian suffering and the escape of more IS fighters.

His reference to the largely-Kurdish SDF forces seeking alliances with the Syrian regime and Russia illustrates that the regional ramifications of this crisis are becoming ever more dangerous.