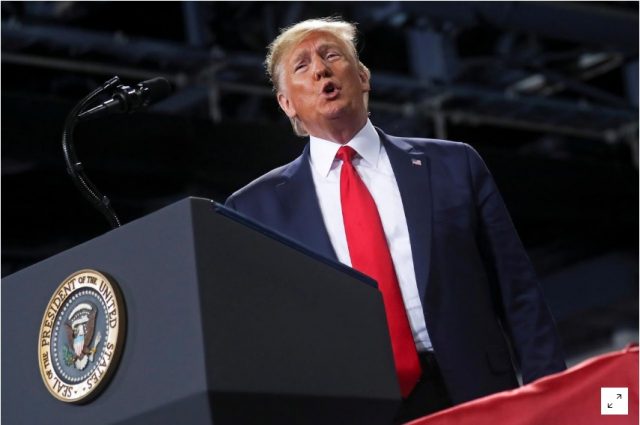 WASHINGTON/BAGHDAD: The US House of Representatives voted on Thursday to stop President Donald Trump from further military action against Iran as the Middle East remained tense after the US killing of a top Iranian commander and Iran’s retaliatory missile strikes.

The resolution passed 224-194 along party lines in the Democratic-controlled House with nearly all Republicans opposed. The measure orders termination of Trump’s war powers to use US armed forces against Iran without Congress’ consent.

The measure now goes to the Senate, which is controlled by Trump’s Republican Party, and faces an uphill battle.

The vote came just hours after Trump said that Iranian military commander Qassem Soleimani was killed by a US drone strike in Iraq last week last because he had planned to blow up a U.S. embassy.

“We caught a total monster and we took him out and that should have happened a long time ago. We did it because they were looking to blow up our embassy,” Trump told reporters at the White House.

His remarks seemed to shed more light on what so far have been largely vague descriptions of the intelligence that drove Trump’s conclusion that killing Soleimani and disrupting his plots would be better than any fallout Washington may face.

A White House spokesman called the House-passed war powers measure “ridiculous” and politically motivated. The measure “could undermine the ability of the United States to protect American citizens whom Iran continues to seek to harm,” an administration policy statement said.

But if passed by the Senate, the measure does not need Trump’s signature to go into effect.

Potentially stepping up international pressure on Tehran, Canada’s Prime Minister Justin Trudeau and US officials said they believed a Ukrainian passenger plane that crashed in Iran on Wednesday was brought down by Iranian air defenses by mistake hours after Iran launched its missiles attacks.

Trump said he had suspicions about the cause of the Ukrainian Boeing 737-800 plane crash, adding: “Somebody could have made a mistake.”