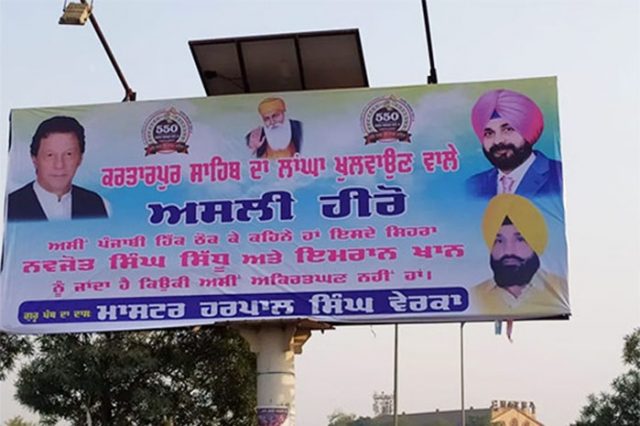 AMRITSAR: People of Amritsar has congratulated both Navjot Singh Sidhu and Prime Minister Imran Khan through different kind of posters in Indian Punjab.

The Posters were seen in Amritsar with a message, “Navjot Singh Sidhu and Imran Khan are the real heroes, for opening Kartarpur Corridor.” Master Harpal Singh, an Indian Councillor, who has put up the posters, said to ANI, “We wanted to congratulate the people who made it happen, Sidhu sahab and Imran Khan. More posters are to be put tomorrow.”

Prime Minister Imran Khan, on November 4, had sent a formal invitation to Navjot Singh Sidhu, asking him to attend the inaugural ceremony of the Kartarpur Corridor on November 9.

Sidhu, while expressing willingness to attend the inaugural ceremony, had earlier requested to the Indian Punjab Chief Minister Amarinder Singh and External Affairs Minister S Jaishankar to grant him permission to visit Pakistan for the ceremony.

“It is brought to your kind notice that I have been invited by the Pakistan government for the opening ceremony of Kartarpur Corridor on November 9, 2019. As a humble Sikh, it shall be a great honour to pay obeisance to our great Guru Baba Nanak on this historic occasion and connect to our roots,” he said.”Therefore, I may be permitted to visit Pakistan for this auspicious occasion,” he said in the letter.

The letter from Sidhu comes as the Indian External Affairs Ministry spokesperson Raveesh Kumar had recently said that invites from Pakistan for the inaugural ceremony would have to seek political clearance.

Historic opening of Kartarpur Corridor is all set to take place in the month of November after both, India and Pakistan, signed the bilateral agreement on October 24.

Prime Minister Imran Khan will inaugurate the project on November 9, three days before the 550th birth anniversary Baba Guru Nanank that will be celebrated on November 12.

Prime Minister Imran Khan, in a message shared on social media, reiterated that Sikhs from all countries will travel to the world‘s largest Gurdwara. “This Gurdwara will strengthen local economy, many jobs will also be created in travelling, religious tourism and hospitality sectors,” he stated. “Buddhists have also been coming to visit different religious spots in Pakistan.”

While Sikh pilgrims do not need a visa for Pakistan, however they are required to obtain a permit before their departure. The Sikh minority in India has long sought easier access to the temple, which is just over the border in Pakistan.

The shrine is about 4 km (2-1/2 miles) from the border. The crossing and corridor – including a road, bridge over the Ravi River and immigration office – will replace a drawn-out visa process and circuitous journey through Pakistan.

All the details about the process haven’t been released by officials yet, but we know that visitors must apply online for a permit, which will then need to be approved by both India and Pakistan.

Pakistan has struck an agreement with India on the Kartarpur Corridor after tough negotiations with the last sticking point being the $20 service fee – that was repeatedly denied by India previously, but later agreed to it reluctantly.

The first-of-its-kind agreement aims to facilitate Sikh pilgrims from India in visiting the shrine of Baba Guru Nanak – one of Sikhism’s holiest sites in Pakistan where Guru Nanak, the founder of Sikhism, died in the 16th Century – in Kartarpur, Pakistan without obtaining any visa but a permit with a validity of one day from dawn till dusk.

According to the agreement, “The government of Pakistan will charge USD 20 per pilgrim per visit as service charges.”

“5,000 pilgrims shall be permitted to visit Gurdwara Kartarpur Sahib through the Kartarpur Sahib Corridor on any given day, with an additional provision for more pilgrims on special days including Gurpurab, Baisakhi, etc., subject to capacity.”

This means that the service charges of $20 will generate revenue for Pakistan and promote tourism from visitors and pilgrims from other countries as well.

Considering the agreement, the amount of revenue Pakistan can generate sums up to $100,000 every day and since the corridor will remain open 365 days of the year, it can potentially generate a direct income of $36.5 million i.e. about Rs 5.55 billion per annum.